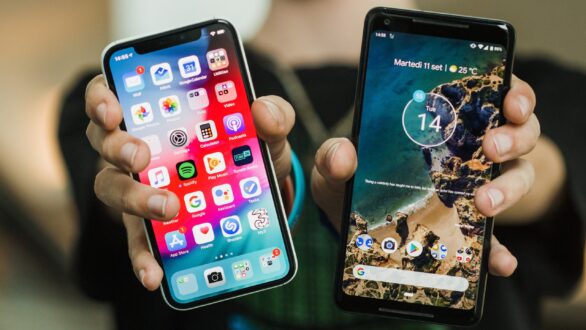 The Future of the Android-IOS Competition

In the last ten years, smartphones have become an ubiquitous part of most people’s
lives. We use them not only to communicate but also to browse the web, shop, play
games, and invest, among hundreds of other uses. And since smartphones are
computers, their operating systems have become a key, if not the most important
component in the success of phone companies and service providers. When the
smartphone revolution began in the late 2000s, there were several mobile phone
operating systems that were poised to potentially corner the market, but today there are
only two: Android and iOS. The future success of these two companies, and whether or
not one will take the lion’s share of the market, will depend on a number of factors, yet
the most important will be which one of these companies better understands the
consumer trends that drive success in the mobile phone sector.

The market growth of smartphones has been phenomenal and although it has slowed a
bit due to the COVID-19 lockdowns and the fact that most people in industrialized
nations now have smartphones, global sales are expected to be more than 1.5 billion
units by 2026, with a compound annual growth rate of 1.69%. The majority of the
market growth will be in the developing world, especially Africa, where the vast pool of
consumers will take advantage of lower prices as the technology advances. But it won’t
just be consumers in the developing world who will benefit from future advances in
smartphone technology, consumers and investors in industrialized countries with
existing and improving infrastructures that facilitate smartphone technology can expect

to benefit from the competition between the Android and iOS if they know what to
expect.

Android and iOS both offer consumers and investors plenty of benefits and will play a
big role in the future of mobile technology, so let’s take a look at how these two systems
came to dominate the market, some of their differences and similarities, and what
consumers can expect in the future. For Google and Apple, which make the Android
and iOS operating systems respectively, it will be important for them to adapt to
emerging consumer and technology trends such as brand loyalty and 5G.

From Mobile Phones to Smartphones

The evolution from cell/mobile phones to smartphones was a much more gradual
process than most people may think, taking place over the course of decades. By
definition, a smartphone is a phone that combines mobile technology with computing,
usually giving the user access to the internet. The earliest devices that would
incorporate smart features with mobile phones were PDA (personal digital
assistant)/mobile phone hybrids released by Nokia, Ericsson, and Kyocera in the mid to
late 1990s. These proto-smartphones were large and clumsy, but most importantly their
operating systems were usually created by the mobile companies, which could make it
difficult for consumers to switch carriers and keep all their data.

The first true smartphones hit the stores with the release of the Windows Mobile phone
in 2000, followed by Blackberry in 2005. The current duopoly of iOS and Android began
when the iPhone was first released on January 9, 2007, which was followed by
Google’s release of the Android operating system on September 23, 2008.

It’s notable that the Windows and Blackberry mobile operating systems have reached
end-of-life, which simply means that users can continue to use the products but there
will be no updates. Although both of these mobile operating systems enjoyed a few
moments in the sun, they were unable to stay current with consumer trends the way
Apple and Android have.

Consumer Drawbacks and Benefits of Android and iOS Compared

It needs to be stressed that the technology discussed here, and the consumer benefits
derived from it, are the operating systems and not necessarily the phones. Since the
iOS system runs on Apple’s proprietary smartphone, they are certainly intertwined, but
Android runs on several different brands of smartphones. This situation can create
benefits and drawbacks for the consumer, and will definitely affect the course of mobile
technology trends.

The most obvious consumer disadvantages associated with iPhone/iOS are the
limitations. Since iPhone and iOS are tied together, consumers have less options to

customize and tweak their phones. And because the iPhone is the only brand that runs
on the iOS system, there are less phones for the consumer to choose from.

Just because restrictions are a drawback for iOS/Apple doesn’t mean that the freedom
of Android is always a benefit for consumers. The level of quality control and
assurances by Apple that its phones and operating system sync well is absent in many
phones that use Android, resulting in a mobile experience that is often slower.

When the two systems are compared for intangibles, the benefits are clearly on the iOS
side. Apple has built a dedicated brand loyalty since the early 2000s, which is due to a
number of factors, including the quality of its products, brand identity, and the
perception that the company listens to consumers. As brand loyalty becomes an
increasingly important part of the retail landscape in the next few years it will be
interesting to see how Android responds. If Android better cultivates its brand identity
and brand loyalty, it could be a major boon to its business.

A final point to consider when these operating systems are compared is their market
share. Although Android leads globally, Apple claimed 23.4% of the market in the fourth
quarter of 2021, which was an increase over the previous quarter. The numbers show
that both Apple/iOS and Android are solid investment opportunities for the future as
neither shows any signs of going the way of Windows Mobile or Blackberry any time
soon.

The numbers show that the smartphone market will continue to grow globally as prices
of phones decrease and wages increase. It is expected that by 2026 the number of
smartphone subscriptions will surpass 7.5 billion, which signals massive profits for
Android and Apple and benefits for consumers. As more people globally buy
smartphones, the prices will decrease and features on the Android and iOS systems will
improve. Although both systems will benefit from the increased global sales, consumers
and investors should take noted that Android and iOS will face the future differently.

Future sales favor Android phones. In Q1 of 2021, Samsung phones sold about 77
million units, while 57 million iPhones were sold in the same quarter. This does not
include the millions of other non-Samsung phones sold at the time that also run on the
Android operating system. It should be pointed out that as mentioned earlier, Android
has controlled the market share for some time and the numbers indicate that this isn’t
going to change any time soon. Despite many of the phones that run on Android being
significantly cheaper than iPhones, which is partially the reason for Android’s control of
the market, consumers often note that they feel Android phones tend to be more
customer friendly and easier to use than the iOS system. For busy people on the go,
this alone can be the difference in a purchase.

Android also appears to be better positioned to take advantage of technological
innovations. Many developers prefer Android because they are more familiar with the
Google development tools, so more and higher quality apps may be available on
Android than iOS in the future.

Finally, how these operating systems handle the transition to 5G should be considered.
The 5G network will offer several benefits to consumers in the future, not the least of
which will be higher speeds for sending and receiving data, and Android and iOS will
both play a role in this evolution. It’s too early to say which system will work better with
5G in the long-term, but so far Android phones appear to have the edge with more
battery life.

Android, iOS, and the Consumer

Overall the average consumer can expect to benefit in the future from the competition
between the Android and iOS mobile operating systems. The competition should bring
down prices and spur new innovations that will make the mobile experience more
intuitive and enjoyable. As these two companies learn more about their customers and
what they want, we can expect even more changes. The overall numbers and some
other trends favor Android, while iOS clearly has more brand loyalty, but both systems
should be around for quite some time.