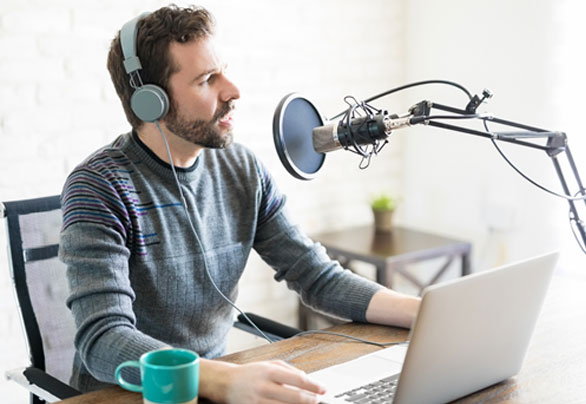 From society and culture, news, politics, health, and even comedy, there seems to be a podcast for every interest. Over the past two decades, podcasts have grown in popularity. In 2019, 55% (155 million) people in the US listened to a podcast, according to Infinite Dial 20. With a myriad of listening options and topics to choose from, podcasts continue to transform the landscape of audio content, creating an outlet for entertainment, information, and creativity.

The Emergence of Podcasting

Podcasting, previously referred to as audio blogging, emerged in 2004 with Apple adding a podcast directory to iTunes, allowing listeners to subscribe and download podcasts over the internet to their devices. Podcasting hit the mainstream with the release of the iPhone in 2007 and the development of Apple’s podcast app in 2012. These technological advancements helped bring in new listeners from all over the world, helping broaden the demographic of podcast enthusiasts. Today, podcasts are produced by one of five segments: media companies, podcast production companies, independent podcasters, non-media businesses/nonprofits, and hobbyist creators.

As podcasts make their way into the mainstream, audiences continue to grow and diversify. According to MusicOomph, 51% of podcast consumers are male, while 49% are female. 40% of podcast listeners are between the ages of 12-24, with 39% between 25-54, and 17% 55 and older, as reported by Edison Research. This report also shows that the majority of monthly podcast consumers 18 and older hold some form of a degree with 28% having some grad school or advanced degree, 25% having a 4-year degree, 27% completing some college, and 20% having a high school diploma or less. An article published by Convince & Convert shows that the majority of podcast listeners are affluent, with 45% having an average annual income of more than $75,000. Podcast listener diversity has increased over the past ten years, as data collected by Edison Research shows that 59% of podcast listeners are white (down from 73% in 2008), with African Americans making up 12% of listeners, 11% identifying as Hispanic/Latino, 7% Asian, and 11% refusing to answer or identifying as other.

In terms of how people consume podcasts, a study by Andressen Horowitz claims that Apple Podcasts remains the dominant app for listening, despite declining from 80% to 63% over the past few years. Spotify comes in second, making up 9.5% of all podcast streams, while 2.9% of listeners use Overcast. When looking at where people consume podcasts, this study shows that 48% of consumers listen from home, while 26% of listeners tune in from their car, 12% from work, 4% at the gym/while exercising, and 10% from other locations.

Despite its rapid growth in popularity, podcasts remain an under-monetized form of media. To make a profit, podcasters may collaborate with advertisers, sell their content as a subscription, release premium content, attend conferences and events, expand into other forms of media, or even use crowdfunding. Though there are several ways to monetize content, ad revenue is much smaller than other forms of media, monetizing $.01 per listener hour compared to $.11 for radio and $.13 for television, as stated by WNIP. Though podcast revenues were down 19% in June 2020 due to the pandemic, experts forecast podcast advertising revenues to grow 14.7% year over year, reaching almost $1 billion by the end of the year, according to AdExchanger.

The Future of Podcasting

As the amount of listeners continues to grow, the future of podcasting looks promising. Statista forecasts that the number of podcast listeners will increase around 20 million each year, surpassing 160 million in 2023. Podcast episode creation has also increased, with a 27% increase in podcast episodes from 2018-2019, according to TechCrunch. With an increase in ad spending, growth in international popularity, and an influx of celebrity shows, the popularity of podcasting shows no signs of slowing down.