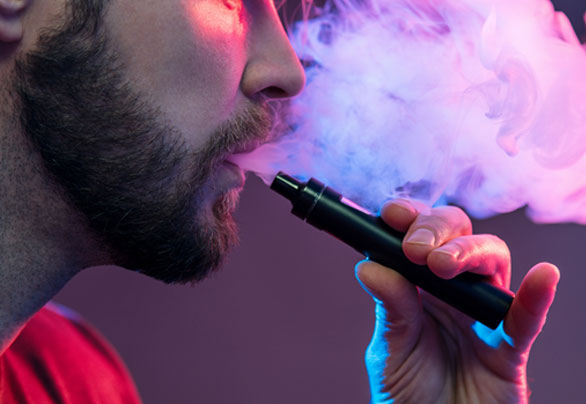 E-cigarettes also referred to as vapes, have surpassed traditional cigarettes as the most popular way to consume tobacco, with 1 in 20 Americans using vaping devices, according to Annal of Internal Medicine. In 2019, the e-cigarette market generated USD 15.9 billion and will continue to rise, reaching an estimated USD 39 billion in the next ten years, as forecasted by P&S Intelligence.

E-cigarettes come in many forms ranging from tanks and mods, disposable and rechargeable devices. Currently, there are three generations of e-cigarette devices. First-generation devices include a battery, coil, and liquid and are available to use straight from the package. They typically last for 200-300 puffs and cannot be refilled. Second generation devices have a rechargeable battery and tank that the user can fill with their e-juice of choice. These e-cigs allow for a more customizable experience, allowing users to adjust the nicotine concentration and vapor volume. For smokers looking for the most flexibility, third-generation devices give users the ability to customize almost every aspect of their device, from the wick material, coil type, and battery power. These devices require fewer refills and outlast other generations on a single charge.

The e-cigarette market has increased substantially over the past decade and will continue to grow, as Technavio predicts the Market to accelerate at a CAGR of 17% from 2020-2024, resulting in incremental growth of USD 29.53 bn. According to P&S Intelligence, drivers of the e-cigarette market are product innovation and technological advancements, the ease of availability, the appeal of electronic smoking devices as an alternative to tobacco smoking, and the social acceptance of e-cigarettes. A study by Gallup shows that 20% of 18-29-year-olds, 9% of 30 to 49-year-olds, and 7% of 50 to 64-year-olds smoke e-cigarettes occasionally to regularly.

E-cigarettes are often cheaper than traditional tobacco products, saving consumers who smoke a pack a day an estimated 92% per year on cigarettes, with e-cig users spending a minimum of $387 per year compared to a minimum yearly cost of $2087 for frequent cigarette smokers, according to Ruthless Vapor. The annual cost of e-cigarettes remains dependent on the type of electronic smoking devices, as well as the type of vape juice used with the e-cig.

Though vaping is less harmful than smoking traditional cigarettes, electronic smoking devices still contain toxic chemicals that lead to long term health risks. Many consumers are misinformed, believing that e-cigarettes are safe, as they do not have the 7,000 chemicals of traditional cigarettes. However, e-juices are composed of carcinogens such as volatile organic compounds, heavy metals, nicotine, and diacetyl, increasing the risk of cancer, heart attack, and stroke infrequent e-cigarette users.

Many e-cigarette devices use nic-salts that allow consumers to inhale high levels of nicotine without the throat irritation of traditional cigarettes. With this, e-cigarettes are just as addictive as traditional cigarettes, resulting in user dependency through a blend of habit-forming chemicals and ease of aerosol delivery. Some cartridges may contain more nicotine than other tobacco products, as a study conducted by Truth Initiative and Center for Disease Control and Prevention shows a 106.7% increase in the average nicotine concentration of U.S. retailer e-cigarette products from 2013-2018. This rapid increase in nicotine concentration has raised concerns regarding long-term health effects and availability to youths.

3. Not an FDA Approved Cessation Tool

Though many e-cigarette devices market towards current smokers as a cessation tool, the FDA does not approve any vaping device as an aid to quit smoking due to a lack of scientific evidence. In a CDC study on quit methods used by U.S. adults, many tobacco users who turn to e-cigarettes as a way to stop smoking end up using both traditional tobacco products and vape devices. To prevent dual-use, many scientists recommend therapy and medication as the most effective methods to quit smoking.

Despite FDA regulations that prevent consumers under the age of 21 from purchasing e-cigarettes, these devices have grown in popularity amongst younger generations. The rise in e-cigarette use by middle schoolers and high schoolers derives from the belief that e-cigarettes are less harmful than traditional tobacco products, as well as the variety of flavors. E-cigarette use poses many health risks for young users, increasing the risk of cancer and stunting brain development, altering one’s impulse control, mood, attentiveness, and learning abilities. In addition to these health issues, e-cigarettes are a gateway drug, making it more likely for young nicotine consumers to try more dangerous substances.